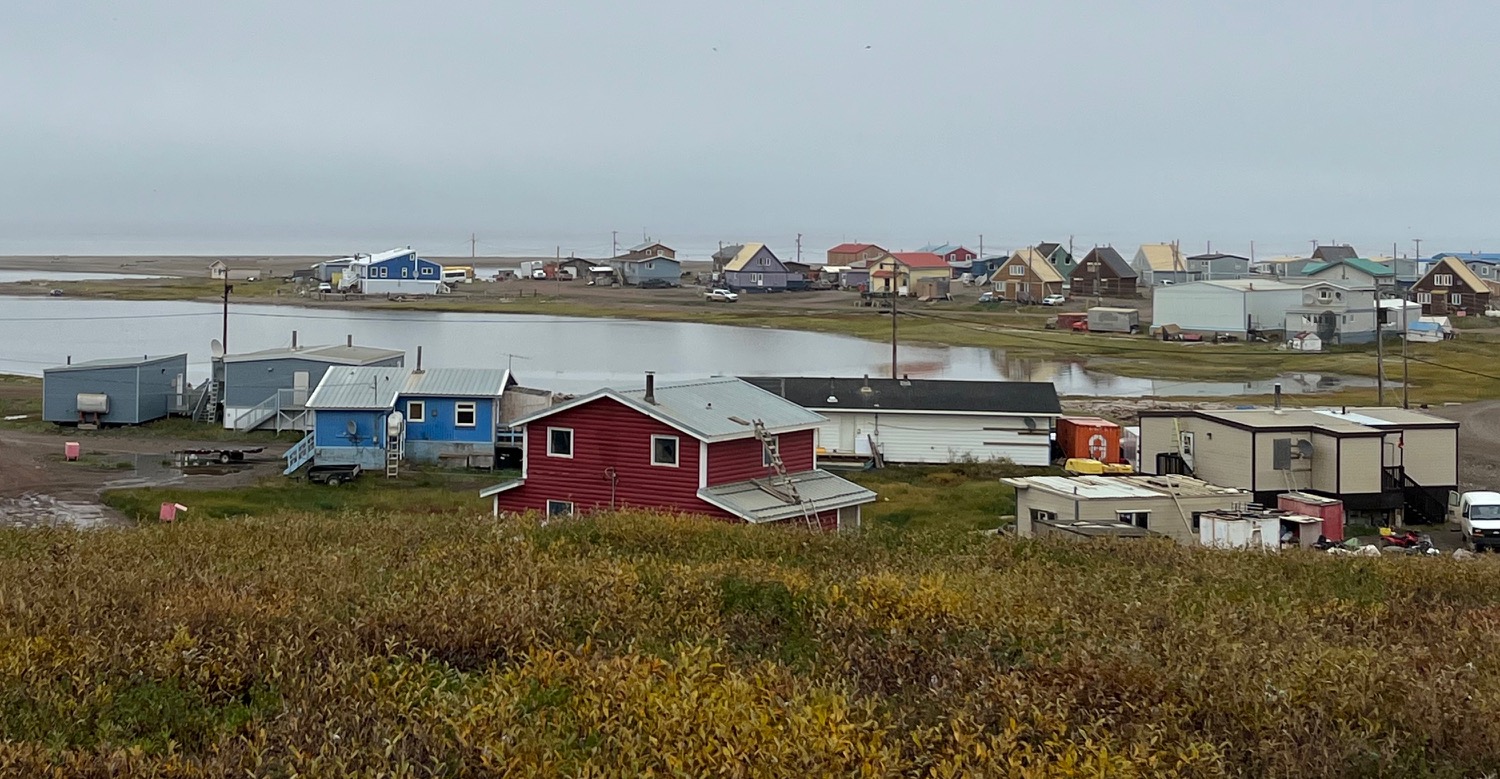 We planned a slow start to the day, coffee at 8 am. Then we had bacon and blueberry pancakes at the picnic table on the edge of the Arctic Ocean!

Just as we finished, Pastor Roy from the Baptist Church join us with his wife and three children. The have served in this area for 3 years. We peppered them with lots of questions about their live and ministry in the area. A really fun opportunity came up in a conversation I had with Roy before leaving Abbotsford. When I asked if there was any thing we could bring along, he mentioned his 9-year-old daughter would really like to have a bike for her birthday which is in early September. Well, when you talking to cycling enthusiast and grandfathers about a 9-year-old wanting a bike it strikes a cord. We had room in storage compartment for a gift. She was delighted and it seemed almost in disbelief.

In the afternoon, we did a “walk about town”, stopping at Grandma’s Kitchen, the only restaurant in town for some muktuk. Muktuk is a tradition food – whale blubber. Tasted a bit like mild pork fat.

Children from Tuk were taken to residential school by boat. Our Lady of Lourdes sailboat was used for this purpose.

Timo had a conversation with a local woman, Marjory, as she was cleaning her fish. A bit later Marjory came by our campsite asked if we wanted a fish. When we ask how much, she said it was free! We had a wonderful White Fish dinner courtesy of this kind lady. Before dinner Timo, Reid and I took the required dip in the Arctic Ocean. Timo was the first in.

Next was Reid and I. In this picture it looks like I’m holding Reid’s hand. Well the truth is he was holding mine!!

Having taken in the local sites, we decided to start our 3,700 km journey home by making our way back to Inuvik today. Just before we did the final touches on packing up, Richard came walking into town. He walked the Dempster pulling his sleeping pod. This is not his first walk, a few years ago he walked across Canada. His cause is connected to orphanages is Haiti. His FB page is: my plod pod. We met earlier on the road up, so he paused to chat and I joined him for the last couple hundred metres of his walk to the Arctic Ocean.

Pulling out of Tuk there is a clear sense of satisfaction.  Many really good things have been accomplished in our Sea to Sea to Sea journey. I’m convinced that God blessed us in so many ways! I wonder what’s next…